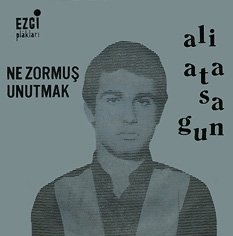 Ali Atasagun is one of the most important representatives of the genre best described as beat garage psych rock'n'roll in Turkey. In 1966 he entered into the Altın Mikrofon (Golden Microphone) competition with the songs 'Yarim' & 'Eminem'. The name on the 7 inch featuring these tracks was called Ali Atasagun Dörtlüsü. A little while after that the band called Genç Arslanlar was formed. With the addition of saxophonist Çetin Yorulmaz the band's name was changed to Dört Harami, however when Ali Atasagun left the band the band changed its name to Haramiler.

Towards the end of the 60s Ali Atasagun continued to release interesting 7 inches like -'Bu gece senle olalım', 'Hiç Birine Benzemez', 'Sakın Basma', 'Ne Zormuş Unutmak'. They are some of the best examples of Turkish beat garage rock. He also recorded 'A Hard Day's Night' by the Beatles with Turkish lyrics renaming it 'Ne Zormuş Unutmak' and recorded 'Let's Spend The Night Together' also with Turkish lyrics naming it 'Bu Gece Senle Olalım', singing chorus in a way that reflected Mick Jagger's energetic performance.